MURDER ON THE SINGAPORE EXPRESS

'What made the room memorable were some brilliant moments of realisation." EscapingSG

You work for the Singapore Crime Scene Investigation (CSI) unit and you rush to the travelling circus to help the police investigate an unusual death. The smallest man in the world is found dead in his caravan. You and your team must examine the clues and solve the mystery.

"Magic at its best. You can almost feel the swords cutting you in two as puzzle solving meets hi-technology." Escape Room Trips

"Two friends and fellow magicians become bitter enemies after a sudden tragedy. You’ll need to pay close attention, as things may not always be what they seem…

"It is the puzzles themselves that make the room worth playing. There’s a good mix of puzzle types and difficulty levels, with surprises in store — delivered by puzzle-solving rather than room technology" Escaping.SG

The murder of a little known Belgium detective in Singapore has captured the world’s attention.

Mysterious murders on railway stations are normally limited to novels or movies. Especially those with devious clues left by an evil killer.
Buy a ticket for the Singapore Express today. 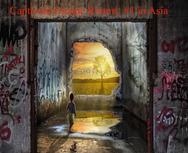 "Some lovely set piece puzzles and a badass Alien. My friends and I had so much fun." TripAdvisor

"A deserted spaceship is heading for Earth. You have been sent by NASA to explore the craft and confirm it is no threat. Are you up to the challenge? Remember: "Nobody hears you scream in Captivate."

A wizard has an extraordinary array of magical creatures. Arriving in Singapore, he might have come and gone without incident, were it not for a misplaced magical case, and the escape of some of the mythical beasts, which could spell trouble. Can you find the Niffler before it causes havoc?

"Very clever puzzles and there was a clear relationship between puzzle, clue and solution and storyline. Tools, props and technology are used in an elegant way and contribute to the story-telling, with obvious care put into the details. I'm definitely coming back." TripAdvisor

Death Row inmates are disappearing from Changi prison morgue after their execution. ​You are hired by the Chief of Police to go undercover as a prisoner to try to discover why. Someone sees through your disguise and brings your execution forwards to today.

Can you unravel the mystery of the disappearing bodies and escape before your execution?

"Having tried eight Escape Rooms during our trip in Singapore, Captivate Escape Rooms were the only rooms we returned back for a second time. The puzzles flowed well, and at the right difficulty for us. On a comparative level, we felt Captivate's rooms are amongst the best rooms we have done worldwide." TripAdvisor

You work for the FBI anti-terror squad and must discover who built a bomb at a Singapore school. Your helicopter lands in the schoolyard and you storm the building. ​Can you uncover the mastermind behind the planned terror attack before zero hour and the bomb explodes?